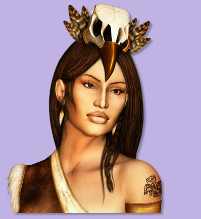 One of the most controversial figures of the Spanish Conquest, is Malintzin, also known as La Malinche or Doña Marina.

She was born to a noble family, was enslaved, became an interpreter and confidante to the Spanish explorer and conquistador Hernán Cortés and bore him a son; she also became a great lady with independent authority.

At birth (1) she was named Malinalli (Nahuatl for one of the 20 days of the Mexicatl month, as well as for a kind of grass that can be used to make rope) (2). Later, she was also called Malinalli Tenépal. The Nahuatl word tenépal means “a person who speaks a lot, with enthusiasm and fluency.”

Malinalli was born into the noble family of the Lord of Paynalla province of Coatzacoalcos, in the Veracruz region of southern Mexico (then a “frontier” region between the Aztec Empire and the Maya of the Yucatan). When her father died (it is said that he was killed because he refused to pay tribute to the dominant Aztecs), her mother remarried and gave birth to a son. Although Malinalli was her father’s firstborn and rightful heir, her mother and step-father favored the new baby. So that the baby-boy would inherit, Malinalli’s mother gave her away to the slave-traders and declared that she was dead. She was around 5 or 6 six years old then.

Before she became the property of the Cacique (ruler or chief) of Tabasco, Malinalli traveled in captivity from her native Nahuatl-speaking region to the Maya-speaking areas of Yucatán, where she learned that language.

The life of Malinalli changed completely once she was in the house of the Cacique of Tabasco. Her day started before the sunrise and ended after sunset; while Malinalli served in this house, she learned the Mayan language and the importance to be able to speak other languages. She also learned to serve her masters unconditionally.

One day news arrived to Centla: white and bearded men had gotten to Mayan territory in floating houses. Hernán Cortés had come to the Tabasco coast from Cuba (around the end of 1518), and started exploring the region with his interpreter, Jerónimo de

1 Historians have not set a definite date for her birth or death: (Birth: c. 1496, c. 1500 or c. 1505 death: – c. 1529, some sources give 1550)
2 There is a widely-held (thou not firmly substantiated) explanation for her name which starts with the Nahua word “Malinalli”, a bad-luck day-sign whose root meaning has something to do with a kind of grass used to make rope (Nahua men—but less so women—were often named for their day-signs). If true, Mallinalli could be translated as “One Reed”, a reference to the coming of Quetzalcóatl, the mythical Armageddon when Aztec civilization was supposed to end due to his divine wrath.

Aguilar, who had learned Maya after being shipwrecked, enslaved by the Yucatecan Mayas for something like 8 years, and later rescued by the Spaniards.

After losing a battle with the Spaniards, the Cacique of Tabasco decided to curry favor with the Spaniards rather than keep fighting them and, as part of the traditional tribute from the looser to the winner, he gave them food, cloth, gold, and slaves, including 20 women. Besides acting as interpreter, Aguilar, who had himself taken holy orders (he was either a deacon or a friar), helped in the conversion of the Mayas.

After teaching them the rudiments of the faith, the women were baptized in March 1519. Maybe because of the resonance of her name, Malinalli… Malina… was called Marina (pertain to the sea). Once baptized (3), Cortés gave the women to his main military staff. Marina first went to Alonso Hernández de Puertocarrero, the most well-born member of the expedition.

One day two ambassadors from Moctezuma approached the white men and asked for their captain in a language nobody understood, not even the translator Aguilar, for he did not know the Nahuatl language. From the group of slaves one answered: “that’s the one you are looking for? and pointed to Cortes; in that moment Marina gained a face, and a personality. Cortés took her aside and promised her not only her freedom, but other advantages if she would be a faithful interpreter. Soon she was serving with Hernán Cortés as interpreter, together with Aguilar, and she became part of all the expeditions Cortes performed in what they called The New World.

When the Spaniards reached the Nahuatl-speaking areas farther west along the Gulf coast, she would interpret between Nahuatl and Maya for Aguilar, who could interpret between Maya and Spanish for Cortés. Malinalli was completely assimilated into her new life; she was now owned by the Spanish and, accordingly to her slave formation, she now had to be loyal and helpful to her new masters.

Marina quickly extended her linguistic skills by learning Spanish. She earned Cortés’s confidence, became his secretary and his source of knowledge about the different peoples and their customs and traditions (4). He learned from her the particulars of her life, and from that time she gained an influence over him that she never lost. She also was his mistress, and later bore him a son. Cortés was often offered other women, but

3 It would have been a sin to have intercourse with a pagan.
4 It was not one unified country but several regions in many ways different from each other (in each region they had a different tutelary god or even different names for their gods), but, in spite of that, the different peoples shared a very similar cosmogony. On the other hand, even if they did not have the concept of a unified nation but many kingdoms with their own rules, most of them were subjugated by the imperialistic Aztecs (also called Mexicas) who asked from them not only in-kind tributes, but also asked for children and young people to be sacrificed to their tutelary god, the bloody-thirst Huitchilopochtli.

he always refused them, demonstrating his respect and affection for Marina. Cortés asserted that after God, Marina was the main reason for his success.

The evidence from indigenous sources is very interesting, both in the commentaries about her role and in her prominence in the drawings made of conquest events. In the Lienzo de Tlaxcala (codex), for example, not only is Cortés rarely portrayed without her poised by his ear, but she is shown at times on her own, seemingly directing events as an independent authority.

Marina was now the official interpreter of Cortes. Through her mouth came out the message of the Christian faith and the inciting of the destruction of their false idols; through her mouth Cortes voiced his intention to punish the oppressors, to stop human sacrifices and other abominable related practices, and to stop the Aztec arbitrariness. Through her voice Cortes expressed the Spanish were allies and were there to make amends and to end oppression.

As she grew in importance due to her decisive role in transmitting not only the words but also the meaning and the sense of them to each party, and in transmitting the fighting instructions from Cortés to the indigenous allies, Spaniards started referring to her as Doña Marina, making evident their respect with the honorific “doña” (great lady). In the same manner, the indigenous people started adding the affectionate, respectful and reverent suffix tzin to her aboriginal name, calling her Malintzin.

Cortés was known as Malintzin-é (Malintzin’s lord), because the indigenous peoples had trouble pronouncing the Spanish r, so Cortés and Malintzin were know by almost the same name: Malintzin and Malintzin-é. Then, attempting to pronounce this Nahuatl name, Spanish-speakers rendered the soft Nahuatl tzin-é sound as ch; the result was Malinche.

Historians do not consider Marina direct responsible for the success of the Spanish Conquest. The Spanish appetite for gold, the smallpox epidemic that killed around 50% of the indigenous population and, of course, the difference in military strategy and armament superiority of the Spanish as well as the presence of horses and fierce mastiffs were major factors.

However, her interpreting skills played an enormous role. She certainly facilitated communication between Cortés and various indigenous leaders, key among them the Tlaxcalans, who were seeking allies against the Aztecs with the brutal demands they asked from their vassals for human sacrifice and tribute.

The high point of her interpreting career was undoubtedly the initial face-to-face meeting between Cortés and Moctezuma, but she was directly involved in numerous exchanges between the Spanish and the many people he encountered and dealt with. She is said to have actively encouraged negotiations over bloodshed, and to transmit to Cortés the indigenous philosophy of life with its poesis and sense of ritual and beauty with so much passion, that Cortés eventually loved those lands and their people to the point of inviting Spaniards not to destroy but to blend.

Although some have considered her a traitor, many consider her an outstanding historical figure. She was outcast from her own people, and she owed no allegiance to the other Mesoamerican powers. She did take advantage of her linguistic skills to secure her own position. But there is evidence that once she was enlisted in the Spanish cause, she was totally loyal to Cortés, despite many opportunities to betray him as the convoluted history of the conquest unfolded.

The Mexican author Gómez de Orozco (5) states that Malinche “was an instrumental part of [the Spanish] strategy, interpreting in three languages and providing essential information about economic organization, knowledge of native customs, the order and succession of kingdoms, forms of tribute, rules governing family relations, and so on.”

During a laborious and perilous journey that she made with him in the province of Honduras in 1524, she travelled through her native land. Her mother and brother presented themselves before her in great terror, lest she should avenge the wrong they had done her, but she received them with affection.

After the conquest Cortés arranged a marriage for her with Don Juan Jaramillo, a Castilian lieutenant. Although Marina was just one of many native women to bear children with Spanish fathers, she is the most prominent, and her son by Cortés, Don Martín Cortés, was the first mestizo of historical note.

Marina also bore a daughter, Doña María, to her husband, Don Juan Jaramillo. Not much is known of her further life. Some say that she died of smallpox, far from her children, around 1527, while others say that in 1550 she presented a petition to the viceroy, Antonio de Mendoza, complaining that the Indians of her commandery of Jilantongo refused to pay her tribute or render personal service, as they were obliged to do.

But what is worth mentioning is that as the mother of both, a son and a daughter of mixed blood, the same mestizo blood that courses through most Mexicans, Doña Marina, Malintzin, may rightfully be considered the Mother of the Mexican Nation.

This entry was posted in Cortes, Malinche, Uncategorized. Bookmark the permalink.